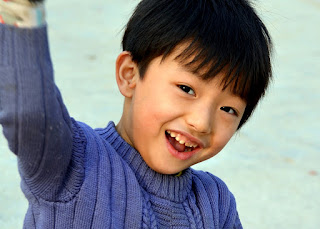 Sending cheers across the country, the Maryland House of Delegates today voted unanimously to approve a measure that requires the Maryland State Department of Education to create "Health and Safety Best Practices" for the use of digital devices in Maryland classrooms.

While there is no opportunity to testify in person in any of these deliberations, please contact your Senator and ask him/her to take action and support this critical effort to protect Maryland children from avoidable harm in their classrooms.

The Maryland House of Delegates is to be commended for their unanimous vote today; it is a display of unparalleled leadership in protecting the health and safety of all Maryland students, and preventing avoidable harm in their classrooms.

Deepest thanks to everyone who is voting, calling, writing, tweeting, sharing, liking, emailing and working so hard to get this done this year. 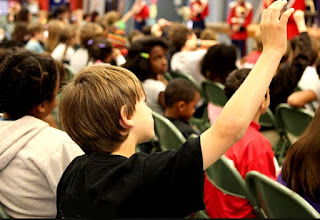 The Maryland House of Delegates adopted amendments to HB1110 today, moving the nation's first classroom screen safety legislation one step closer to passage.  A final vote of approval from the House is expected tomorrow when the delegates reconvene.

The bill's next step will be in the Senate Rules Committee, and then on to the Senate Education, Health and Environmental Affairs Committee.

LATEST: Many thanks to the House Ways and Means Committee for moving HB1110 forward for a House floor vote - scheduled for Tuesday, March 27.

UPDATE 3/22: The Montgomery County Board of Education has reconsidered its position on HB1110 and has voted unanimously tonight in support of the classroom screen safety bill. 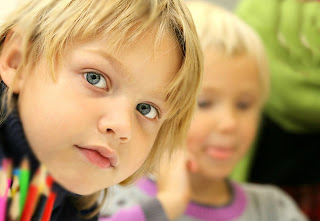 Thank you, Delegate Luedtke and the members of the House Ways and Means Education Subcommittee who voted today in favor of this critical legislation. Thank you, Delegate Steve Arentz for sponsoring the bill. Thank you, to all the co-sponsors who are standing up for our children's health in the classroom.

And thank you to all the people who have linked arms and are working so hard to get this legislation through. We still have a long way to go. Please follow on Twitter for the latest. 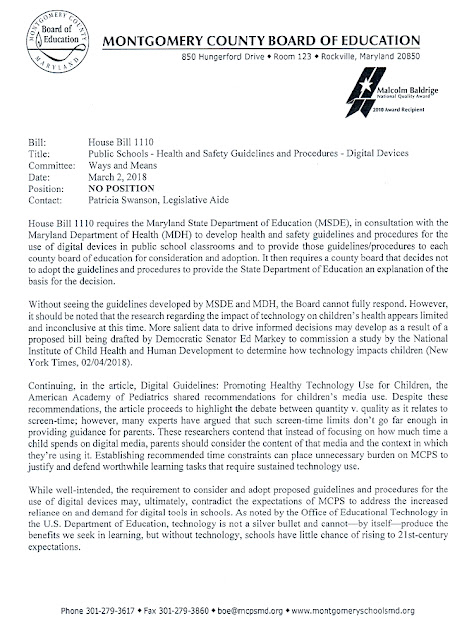 So many people to thank

The support letters for HB1110 overflowed in the House Ways & Means hearing folder on Friday, March 2.  There is no opposition to this bill. It has 32 co-sponsors representing both parties, from across the state. And the fiscal policy note indicates it will not cost the state or local districts a dime.

Campaign for a Commercial-free Childhood submitted a petition signed by over a hundred of their Maryland members - mostly from Montgomery County - along with their organization's firm endorsement.

It was a long day for everyone - especially Committee members - as several bills lasted well into the evening. Our sincere thanks to Chair Anne Kaiser, Vice Chair Frank Turner and all the Committee members for their patience after such a long day, and their professional attention to this matter.

And hats off to those who stayed during the windstorm to testify on behalf of the bill, especially Delegate Steve Arentz, Leslie Weber, Julie Sugar, Pam Kasemeyer and the indomitable Ms. Rachel Faulkner. Representing the Maryland Occupational Therapy Association, Ms. Faulkner stayed all afternoon just to ask that her profession be included in this critical effort to protect Maryland students from avoidable harm in their classrooms.

Let's hope that the education subcommittee members will appreciate the gravity of the public health risks facing our children, recognize the overwhelming support for this bill from the medical community, parents and child health experts, and recommend its approval.

I am writing in support of HB1110: "Public Schools - Health and Safety Guidelines and Procedures - Digital Devices." The bill's primary sponsor, Delegate Steve Arentz, represents my district and has championed this effort to protect Maryland's children from the growing list of health risks associated with the use of the schools' digital devices.

It is encouraging to see so many members of the House Ways and Means Committee as co-sponsors of this crucial effort: Delegates Buckel, Ebersole, Hornberger, Patterson, Rose, Shoemaker and Tarlau, thank you. This is a vitally important bill and your support is deeply appreciated.

Just this week the American Academy of Pediatrics (AAP) released data showing that obesity remains epidemic among children - and that diabetes and heart disease are a growing problem, as a result. The AAP also announced this week that teenagers should be screened annually for depression, given the recent dramatic spike in teen suicides. Ophthalmologists report that myopia is also impairing our children, leading to problems in school, and posing additional risks for blindness later in life from associated glaucoma, cataracts and retinal detachment.

All of these conditions - and more, such as sleeplessness, anxiety and addiction - are related to the daily use of digital devices according to researchers.

HB1110 brings MSDE together with MDH and a group of medical experts, the teachers' union, MABE, and parents to craft guidelines that will protect Maryland's children from avoidable harm, while they learn new technologies.

This effort has overwhelming support statewide and nationwide from the medical community, child health advocates, county elected officials and parents. The Maryland State Medical Society (MedChi), the American Academy of Pediatrics' Maryland chapter, and the Mental Health Association of Maryland all endorse HB1110. Queen Anne's County Commissioners support this legislation. They are joined by Prevent Blindness America, Campaign for a Commercial-free Childhood, Parents Across America, and Common Sense Media, who has just launched a campaign to combat the health problems associated with digital device use.

These advocates and experts all agree: the unregulated use of school digital devices is a serious threat to children's health and preventative steps must be taken to ensure that Maryland students are protected. HB1110 creates a statewide framework of safety guidelines for local districts to adopt, enabling our children to master technology, without being harmed in the process.

Your favorable review of the legislation will make the difference in the health of every Maryland student, now and in the future.

Thank you for your consideration,