7/23/19 UPDATE: No action was taken to provide an interim report; MSDE failed to publish 'health and safety best practices' for the schools' digital devices by June 1, 2019, as mandated by law; and the documentation they have ultimately provided to local school districts is woefully inadequate. Here is just some of the documentation MSDE and MDH ignored. 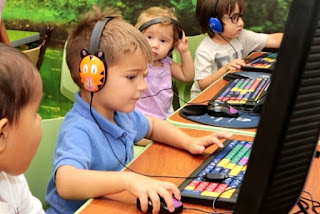 And while the Maryland General Assembly spoke with a single voice, unanimously approving HB1110/Ch244 "health and safety best practices for digital devices," the House Ways and Means Education Subcommittee, chaired by Delegate Eric Luedtke (D-Montgomery) had removed language from the original bill that would have required important stakeholder participation and an interim report, before voting it out of committee. In doing so, Delegate Luedtke's subcommittee enabled the state department of education to "implement" the law with no oversight or accountability.

Where does screen safety in
Maryland stand now?

Our children's classroom digital device protections remain in doubt a year after Governor Hogan signed the bill into law. The amended law only requires the Maryland State Department of Education (MSDE) to create something by June 1 - with no proof of merit whatsoever.

MSDE must present its suggestions for digital device health and safety practices to the school districts by July 1, 2019 - when stakeholders are at the beach, and little or no school communications take place.

And although the law does not require local districts to adopt the MSDE health and safety practices, most are "waiting to see" what MSDE does. Should the Department's efforts ultimately prove to be as hollow as they are right now, those empty promises are likely to be repeated statewide.

This means Maryland students could remain unprotected from the myriad health risks posed by the schools' digital devices - including myopia, dry eye disease, retinal damage, obesity, addiction, sleeplessness, and increasingly, mental illness - which are reaching epidemic proportions, according to children's health experts around the globe.

After months of Public Information Act inquiries, it's become clear that MSDE has been working to minimize the impact of this critical law, undermining the intent of the General Assembly. Unlike other health threats to students, such as lead in the water or radon, this health threat is actually introduced by the schools themselves, so the situation is intolerable.

Documents reveal that powerful ed tech interests began micromanaging the new screen safety law's implementation soon after it was passed, with the complete cooperation of MSDE and full knowledge of the Maryland Board of Education.

The Consortium for School Networking (CoSN) recognized this law as the first of perhaps many threats to their empire - their membership boasts some of the biggest tech companies in the world, including Microsoft, HP and Amazon Web Services.

Records show that as early as June of last year, CoSN contacted MSDE and together, they began collaborating with the Maryland Department of Health (MDH) and Maryland Public Television (MPT).

The state's legal mandate to protect students is being ignored

It's clear that this powerful special interest group has had no trouble insinuating their ed tech messages into Maryland school policy, ensuring that daily digital device use in Maryland classrooms remains unchallenged - regardless of the law or the serious risks posed to children's health.

MSDE leaders who have consistently ignored medical concerns eagerly welcomed CoSN's participation and influence, and were pleased at the invitation to participate in the group's annual conference. PIA inquiries show that local school district IT directors across the state were also happy to cooperate with CoSN, many of whom are CoSN members themselves.

CoSN's executive director wrote to school IT directors across the state in October, assuring them that the special interest group had things well in hand when it came to Maryland's screen safety law, concluding: "Given that this is the first legislation passed of this sort, it is important to us that Maryland 'do it right.'" 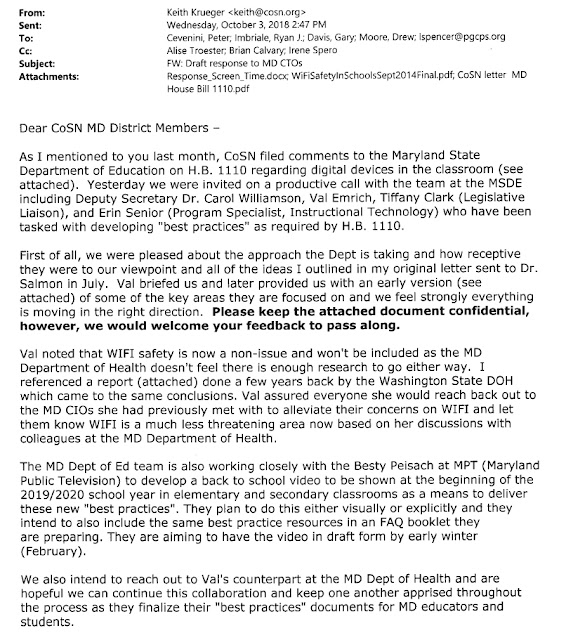 The Maryland Department of Health (MDH) representative - who was supposed to ensure authentic medical oversight for our kids - likewise has cooperated and seemingly recanted earlier public warnings about digital device safety that have been publicized worldwide.

As noted above, Maryland Public Television (MPT) has also helped dilute the implementation of critical classroom safety measures.  A video that MPT has been contracted to produce for MSDE only mentions "healthy behaviors" in passing.

Indeed, the intended audience doesn't even include the students themselves, according to the MPT memorandum of understanding with MSDE, shown here:

Documents clearly reveal that state agencies and CoSN have been working together to protect the schools' digital curriculum - not our children's health. The group has widely distributed their manipulative messaging, encouraging the state to "shift the conversation" away from the serious health risks posed by the schools' digital devices.

Will Governor Hogan demand transparency and a public interim report?

Maryland elected officials voted unanimously in both the House of Delegates and the Senate to make sure our children have necessary protections from the schools' hazardous equipment. "Shifting the conversation," or watching a glossy video offers our children no protection whatsoever. MSDE's subversion of the law cannot continue unchecked.

This is a charade, about which Governor Hogan's administration has been consistently informed since September, as has Dr. Justin Hartings, president of the Maryland Board of Education. The 34 sponsors of the law have also recently been informed.

Given the obvious interference by this special interest group, and the complicity of Maryland agencies and IT directors statewide, the Governor should take immediate action on behalf of Maryland students and voters.

An interim report for HB1110/Ch244 should be posted online for lawmakers, medical professionals and parents to review, to ensure that the law is upheld and our children get the authentic medical protections at school that they need and are legally owed.

Demanding adherence to the manufacturers' safety warnings - at minimum - would be a good first step, Governor Hogan. The schools have failed to share with teachers, parents or students even those basic warnings, which include "serious bodily harm" if the schools' devices are not used properly.

Let's hope it doesn't become necessary to ask the Joint Audit Committee to investigate this situation, to ensure that special interest groups and educational politics are not denying Maryland children their lawful right to a safe and healthy learning environment.